Originally, in the Middle Ages, the SENTIER district was considered as one of the most dangerous of Paris!
Delimited by rue Montmartre the Boulevard Sébastopol, Poissonnière, Bonne Nouvelle and Réaumur Street, the Sentier already serves as "decor" to the novels of Balzac in the mid-nineteenth century, for his character Maximilien Longueville fabric vendor rue du Sentier, in his novel the ball of Sceaux, published in 1830!
We are very far from "La vérité si je mens" moovie comedy of 1996 narrating the tribulations of fashion ready-to-wear manufacturer: textile trade, manufacturing via short-term channels and workshops adjoining wholesaler's showroom, haberdashery, leatherworkers or subcontractors!
During the rising phase of the internet bubble (1997-2000), fifty start-up companies set up in the Sentier district, including Yahoo! and Nomad: a new adventure begins! The bursting of this one will lead to the closing of many companies in  2000
https://www.anousparis.fr/a-voir/lhistoire-du-quartier-du-sentier-en-3-lieux-emblematiques/

TRANSITION
All the Frenchies did not moove to Silicon Valley in California, even if they are estimated between 35 and 40 000 to have expatriated to imagine the future!
https://www.lejdd.fr/Economie/Ces-Francais-caches-de-la-Silicon-Valley-90113-3085784

Silicon Sentier is an association created in the early 2000s to try to form a strong network of French start-ups in the Internet sector. Successful bet. In September the association will move street from  rue du Caire to Paris in huge offices to gather its 3 components dedicated to entrepreneurs: Silicon Experience, Camping, Canteen ... And this last one has become the meeting place of the Web startuppers.

BETWEEN GRANTS OF PARIS CITY AND success of the French Tech

Silicon Sentier, an association friend of Anne Hidalgo, had decided to relocate all of its activities in a space of 1500 m² located rue du Caire . This installation work  was helped at  80% by the city. In total, these installation works cost 2.4 million euros! But do not panic for Silicon Sentier, since Anne Hidalgo and the mayor of Paris are behind her for financing and subsidies.

NUMA
https://www.numa.co/
Silicon Sentier "since 2000, is the first entrepreneurial association to establish rue du Caire in a former textile factory of the 2nd district, and initiates the deep transformation of the district. It's the first coworking space, the first startup accelerator and the first open innovation program. Since April 2014, Silicon Sentier has become Numa (contraction of "digital" and "human") and has become international. At the same time incubator, coworking space, reception center for conferences, workshops and Fab-Lab, Numa is the showcase of Parisian entrepreneurship.

Opened in 2017, the 4th Spaces French site located at 124 rue Réaumur, offers more than 4,500 square meters of fully equipped workspaces for entrepreneurs, from start-ups to large companies looking for an address at the once prestigious and practical. Note that the building is one of the most beautiful Parisian style buildings "Art Nouveau" and was built in 1904. The space has been refurbished to offer 7 floors of private offices and shared workspace, meeting rooms, and not to forget a relaxation area, a corner café and access to sports classes ... Spaces is part of a global network offering flexible and progressive contracts tailored to the needs of entrepreneurs and startups.

50PARTNERS
http://www.50partners.fr/
50partners settled since 2013 rue Jean Jacques Rousseau in a former workshop, is an original startups support structure "inspired by Anglo-Saxon incubators" and proposes to support start-up companies by guiding them to their first fundraising. 50partners brings together the expertise of entrepreneurs for concrete and personalized support of start-ups: mentoring, financing, access to a network of expert partners and key elements of the ecosystem (the "friends") but also of course offices to provision and access to an international network of partner accelerators. Partners such as Level39 in London, Chinaccelerator in Shanghai, Creative HQ in Wellington, and Techstars in Seattle.

These pioneers of NEW TECH practice the "flex office" work of course OPENSPACE, also a new way of thinking  furniture, these START UP have inspired the brand: MOORE which produces the ultimate "trend" furniture, created for those and available in the Silicone Sentier, The MOORE Apartment, showroom located: 38 rue du Sentier 75002
www.mooredesign.fr
Moore's promise: make office furniture a piece of serenity! 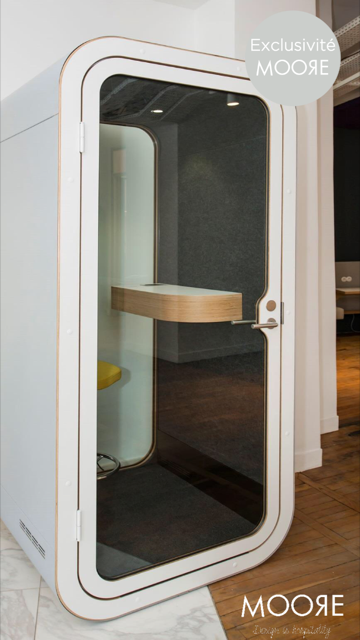 With its high structure closed by a roof, Cocoon brings comfort and intimacy in the context of informal meetings. © DR 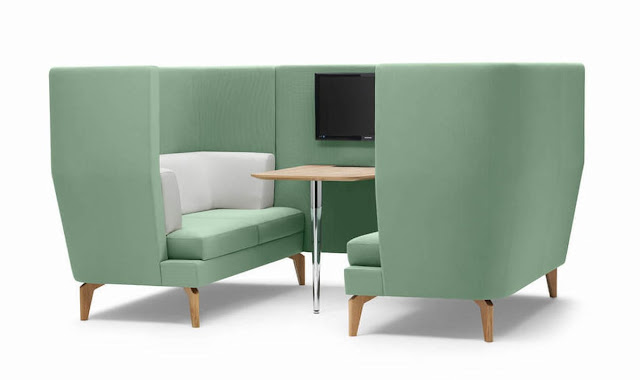 The alcove is making a revolution! Avant-garde furniture by Moore Design,A must have for  offices of trendy start-ups.

A neighborhood whose prices of Real Estate are not foreign to this mutation:

An enquiry by : Nathalie Molho Hatem
Real Estate Agency Les ENFANTS ROUGES
17 PLACE OF THE VOSGES 75004 Paris
To find your home or for any valuation Contact 06 60 69 77 67 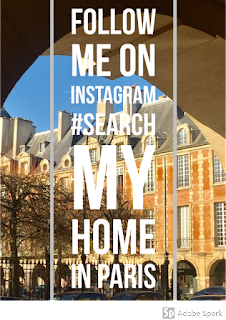 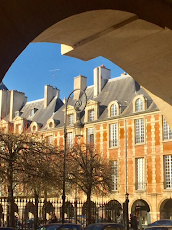