Parisian mainstay of French haute cuisine, L'Ambroisie restaurant - three stars in Guide Michelin - lies in the heart of the Marais, Paris  historical district, at 9 Place des Vosges. The cuisine of Bernard Pacaud is a must : classical, sophisticated and seasonal, composing  "an ode to exceptional products".
This legendary address is offering a unique dining experience 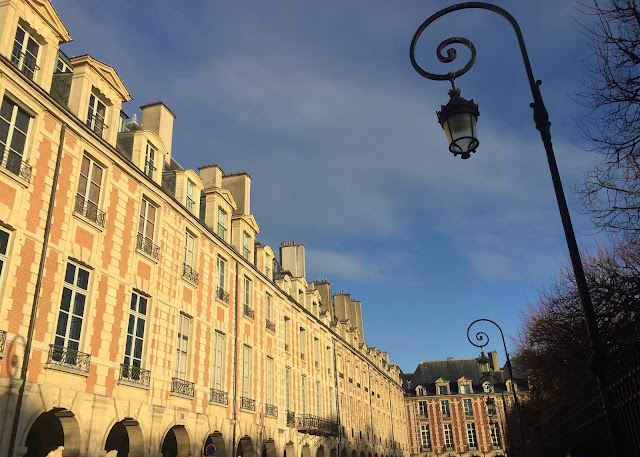 Tell us the origin of the project? The training of Chef Bernard Pacaud and the beginning together: how did it take place?
Bernard Pacaud, trained by Eugénie Brazier in LYON, famous three stars restaurant : "la mère Brazier"  (when only 7 three stars restaurants could be found in France at that time), evolved very quickly through two other restaurants, then as Chef of the Vivarois (also Michelin starred) where we met while I was a manager intern.  I wanted to support him in his project to create his own restaurant and this is how the first  l’Ambroisie  (I found the name) was created. 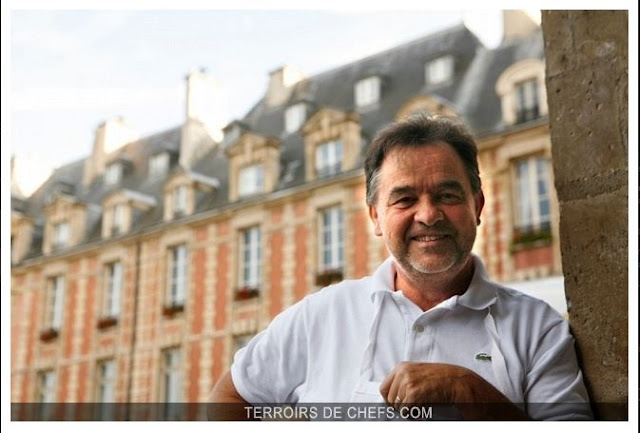 How was it that you thought of opening the restaurant l’Ambroisie PLACE DES  VOSGES as it already existed for five years (from 1981 to 1986) at another address: quai des Tournelles ?
Michelin starred after 10 months , ( 2 stars  a year after) we had to find a larger place. We had a friend who was a  decorator and who told us about this address Place des Vosges.  We hesitated for a short while but we went for a visit and fell in love at first sight ! A real Coup de Coeur  !we  knew we had found the place  !

What did the Place des Vosges look like at that time ?
The mansions around the Square had not been completely restored yet and  it was a real challenge! Besides  the rooms of the restaurant have also been completely renovated

Was the decoration of the restaurant entirely created?
The decorator Graf worked on these rooms of exceptional proportions. He tore everything down and worked on the codes of the 17th century : at the beginning there were only the first room and a winter garden
Twenty years ago, we were lucky enough to be able to expand: the work lasted 6 months, we highlighted the original floor; Laid out wooden moldings of Mansart, with the help of the architect GRAF and showed the harmonious proportions of the former property of  Duke de CHAULNES (1676-1744), dating from the 17th century 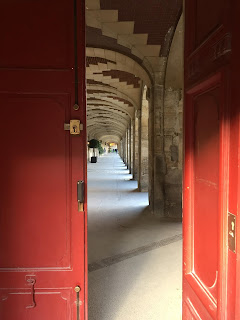 What are your emblematic dishes ?
Customers come for classic dishes that are light and a la carte all year round, such as bass with caviar, light chocolate pie, scampi puff pastry, or truffle puff pastry, the menu evolving with the seasons!

Are you tasting the chef creations ?
Of course ! This is a must! I like to feel the seasons going by according to the products arriving in the kitchen: white truffle, asparagus, morels, black truffles ... Suppliers come to us with exclusive selections for l’ Ambroisie

The service stands out for excellence like the carte menu, how do you recruit the best ones?

Are the recipes written, referenced?
No, but we have listed some of them through two recipe books that will be re-edited: one L'AMBROISIE and the other about  health and gastronomy  (the impact of our consumption on our arteries), written  with  the help of Professor FABIANI to limit cholesterol: recipes based on olive oil and grape seed oil

What underlies the motivation, the passion of Bernard Pacaud?
Sincerity, honesty, good craftsmanship: being intransigent about sourcing ,products, quality, regularity,  there is also some pleasure  in this daily requirement!

He is said to be an extraordinary team leader: how do you relax when you have to deal with this  level of excellence ?
One must work about his character , but yes he rarely gets angry! He is rather of equal temper! It is perhaps his passion for the martial arts (black belt of karate) that gives him that inner strength! Or the joys of pétanque to escape the stress!

How is his perfectionism expressed?
Bernard Pacaud takes care of every detail such as  the floral arrangements, perfectionism is pushed to the extreme: through the products he chooses himself (each supplier comes to propose his products to the Chef) through the decor that has undergone a recent renovation: LED lights designed for l’Ambrosie in exclusivity, through the menu that allows him to orchestrate subtle, sincere and innovative dishes

What makes you most proud?
To live together our common passion, in order: the path chosen by our children, the success of my husband, the restaurant!
Our son Mathieu is also Michelin starred : two at "History" and one at "Hexagon", and finally crowned Chef at the "Divellec" * at 35 years old (where he co-signs the menu  with his father)! And also Alexia, our daughter who has joined the team

Tell us about your experience in Corsica last summer, you who are native of the Island of beauty?
Mathieu has achieved an incredible first experience in an amazing resort : he has created an innovative menu melting local products with his contemporary vision at the Domaine of Murtoli in Sartène, which has been so successful that it will be remade each summer !

The American Presidents having dinner at l’ Ambroisie, a new diplomatic tradition?
During the visit of President CLINTON, it was the first time that a president was invited to dine outside the ELYSEE, by President CHIRAC in 1997, a real derogation to the rule
The neighborhood had been looped with maximum protection, the CIA had even invested the kitchens by posting tasters!
The tags of PLACE DES VOSGES had been removed! The dinner had been orchestrated in extreme confidentiality
For president OBAMA and president HOLLAND: we were used to  it ! We also had helicopters that rotated over the area and the entire perimeter secured with a taster also in the kitchen
It was during these two exceptional occasions an extraordinary spotlight, highlighted by all the media in the whole world

Tell us about the MACAO opening?
It is Mathieu’s idea, the opening is planned next July, with the same menu, which represents a real challenge in terms of sourcing and organization

How is your clientele evolving ?
At the beginning we had 95% of French! Then more and more foreigners who have become regular customers who go down to the palaces or who live in Paris, then VIPs like the actor James Spader (Black List) who quotes the Ambrosia in a film replica: lunch in L 'Ambroisie, the best restaurant in the world, or LOUIS MALLE who demands to be invited to the Ambroisie  as a reward for his participation in a jury!

Excellence is also in the detail  in terms of volume control which allows to  keep high  quality standards demanded by  customers
Yes we  receive a maximum of 38/40 persons, and  have one service at lunch and one service in the evening

When you are off how do you relax?
I love cinema and reading!

Do you live in the Marais?
Yes I am lucky enough  to live in the most beautiful district of Paris!
I like to cross the Hotel de Sully it is extraordinary to feel the weight of past centuries and realize this framework is an exceptional luxury, which allows us to reconcile the Parisian lifestyle  and the desire to innovate incessantly
In the notion of heritage of monuments or gastronomy I like the idea of ​​continuity and transmission!

Do you feel your entrepreneurial experience as a French success story like a luxury brand : GABRIELLE CHANEL for example?
Yes, exactly as Chanel was wearing  her creations, it is the perspective of sincerity and the quest for perfection, through our couple history, then the history of our family, it is really "lived" in our genes!

Do you have an address to recommend to our readers?
A walk PLACE DES VOSGES, passing by the HOTEL DE SULLY and its bookshop, then the Picasso Museum within the Hotel Salé and the Carnavalet Museum of course! And for shopping : the beautiful addresses like Guerlain or Chanel that have settled in the Marais recently! Le Marais attracts always and again!