Why join the services of a flat hunter for your parisian real estate project By Nathalie Molho, expert in real estate Paris France

The profession of  Real Estate Hunters was born at the dawn of the 21st century and revolutionized the real estate profession.
“Becoming a true partner, whose job is complementary to Real estate agencies, the flat hunter brings to acquirers, most of the times overwhelmed by their activities, listening, advice and availability required for research and purchase of real estate.” I quote the FFCI (French Federation of Real Estate Hunters) 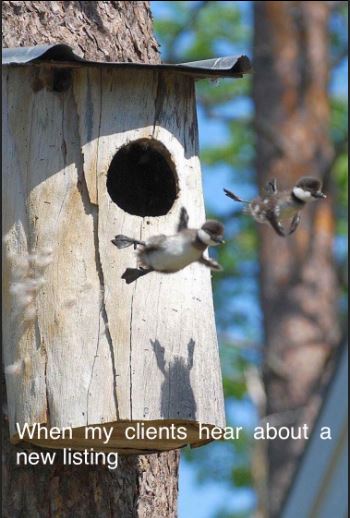 Mostly for a will of efficiency and time savings, (too often the visits are discouraging, and do not match the desired apartment.)  many customers prefer to engage themselves with an apartment hunter who will perfectly understand their criteria and will only offer properties accordingly

As a flat hunter myself, I will be happy to receive you at the Agency, an agency in the heart of Paris in the Marais (Agence Sainte Catherine is accessible by Metro line 1 or 8, BUS 69/96/29) by appointment for a personalized study

Will you rather be looking for a top floor, as this picture below showing a studio under the roof ?

Or a  ground floor? 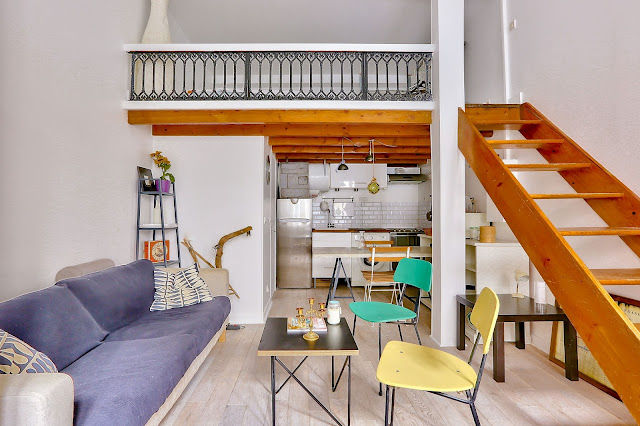 This document will precise that your flat hunter will be in charge :
• To look for a property  whose designation is made from a specification list established according to your criteria : location, neighborhood, area, budget, style of the property, environment, work to consider ...;
• The duration of the mission; usually three months, likely to be renewed;
• To send regular reports of pre-visited properties accompanied by digital photos (subject to the agreement of the owner of the property visited); the frequency and content of these pre-visits are defined in the specifications;
We provide you technical advice during the visits;
We work in the absolute confidentiality of all information that you communicate to us;
The amount of our fees (VAT, excluding notary fees); payable upon signature of the deed of sale by the notary.
I prospect on the entire market (direct owner, real estate agency, wealth manager, notary, developer, developer, merchant and property manager)
Fees are due only on the day of the sale The price will never be higher than 8%. (fees between 4 and 8% INCLUDED IN THE PRICE OF PRESENTATION OF THE APARTMENT)


I accompany you to the notary at the signing of a sale agreement ( draft reservation contract )and 2 or 3 months later to the authentic deed
I inform you about the precautions to take before buying a property:
- Carrez law ( what does it means)
- If attics verifications that they have been bought and belong to the lot concerned
- If a velux  exists : verifications they have been declared in General Assembly in the co-ownership and have received the approval of the town hall
- Double glazing if they are not already installed I propose to make a quote
- Same for electricity
- I could introduce you to decorators and interior designers if needed 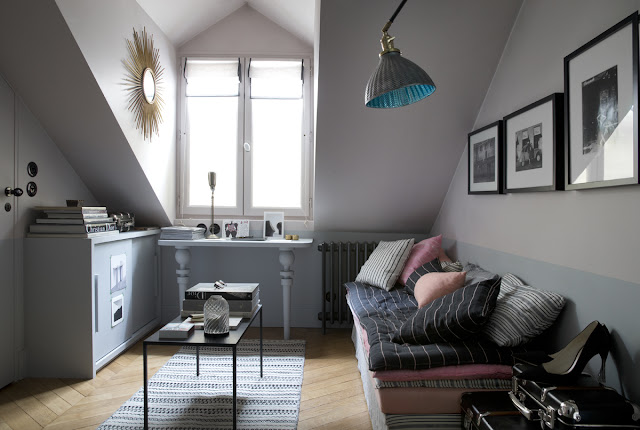 - If you invest I propose a rental quote and puts you in contact with the person who will take care of you for rental management
- If you need a broker , you will be in contact within 24 hours
- Finally I inform you if necessary the general procedure for the first purchase, or I specify the obligations of the seller under the ALUR law

With more than 40 recent sales, our team welcomes you and will help and advice you
If you need to ask a question to the Building Trustee of the property you are about to acquire, we assist you.
If you need to make a partial change of destination in your apartment, we will indicate the steps to take
If you want to contact the architect of the building to reassure you on a point that worries you, we put you in touch with him
Non exhaustive list (!) 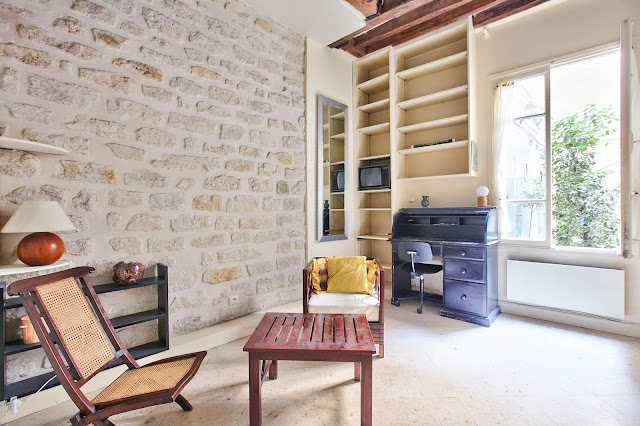 How does design impact our lives?
Through the attractiveness of its designers, France is winning the first place in the world of DESIGN thanks to its creativity, for example : MAISON and OBJET  fair – real reference now , thanks to the number of opening of designers show-rooms, but also to the numerous settlings of  international dimension creators ,  interior designers and decorators .... They  became real stars !
Through a brief history of design, let's discover how our habits evolved thanks to design
culture !

“ …The history of design is inseparable from the industrial revolution, mass production and
technological experimentation. By overcoming all historical references and drawing inspiration
from cubism, the Bauhas and De Stijl Dutch movement laid the foundations for design in the
20's,explains Anne Christine Pierre, Interior designer at Marais Decoration
•   The word "design" made its official appearance in 1929, as a consequence of the majoreconomic crisis of the time. Facing a market hit by the crisis, a few American industrialists hired specialists of the form:  cartoonists and interior designers in order  to make their products more attractive and more competitive

Raymond LOEWY (1893-1986)
Born in France, emigrated to the United States in the 20's, he was a well-known fashion illustrator before becoming the genius and proneer of design with the introduction of aerodybaic lines or industrial products  like cars, locomotives, bus and cigarettes cases LUCKY STRIKE
Famous thank's to the book "Ugliness dosn't sell' Raymond Loewy was the firsy to understand and convince industry that a good design could easily increase volume of sales

Today the challenge is transfered elsewhere, with the digital stake, give shape to the elusive and respond to new lifestyles and  a new kind of conxumer : the hyperconnected nomad !

The designers, stars of the decades to come?
They always had a star status: Raymond Loewy, photographed as a star in the 30's
Patrick Seguin, a gallerist who has been instrumental in helping many collectors rediscoverFrench designers such as Jean Prouve, has been exhibiting Royère for years, and opened a show at his London gallery in 2016 showcasing his work.


After having exhibited Royere for years, he declares: "One may say there has been a worldwide recognition of mid twentieth century design: Le Corbusier, Jean Prouvé, Charlotte Perriand, Pierre Jeanneret and Jean Royère managed to set a unique vocabulary and are recognized and have their rightful place in the history of art. For more than 25 years, we have undertaken and completed a rigorous amount of work to promote their creations, and also to ensure that the largest international collectors and most prestigious museums include their pieces in their collections. At the same time, we developed an editorial line of publications, we published a two-volume boxed set about Jean Royère in 2012 with Galerie Jacques Lacoste, with more than 5000 original documents, archive images and blueprints."

Born in 1949, Stark was immediately famous when President Mitterrand asked him to redecorate his apartment at the Elysee Palace. Metal is one of his favorite materials and elegance and sobriety of his furniture echoes the pure lines of the 30s. This leads us to consider Starck (whose slogans are: “producer of goods” and “TRUE BEAUTY IS HARMONY” ) as one of the emerging leader in design, and as a transmitter of design through a transversal vision of his profession and his multiple skills. Considering creation as a moral duty, a logical consequence of the obligation to understand our world, he is currently designing for several editors : Alessi, Emeco, Kartell, Flos, Driade. He also collaborated with Puma designing sneakers for fashion fans! He was chosen by the French designer JP Gaultier to decorate his flagship store in New York, his bubbling creativity with more than 200 projects per year, allows him to express himself as well on the design of boat (Steve Jobs Boat or the Sailing Yacht design for Andreï Melnitchenko)  or hotels (Mondrian Hotel in L.A. Mama Shelters Hotels, Delano Hotel in Miami, ) and on various objects relevant to his iconoclastic aesthetics
http://www.starck.com/fr

Design Museum Holon will serve as a leading hub for innovation in the field of design
http://www.ronarad.co.uk/home/

She began her career with crossroads, being a journalist of decoration and art before founding MAFIA the first TRENDS  office, her main client being the brand PRISUNIC. With Didier Grunbach, she created the Creators and Industrials group, launching fashion designers before launching a new ECART office that, through the re-edition of forgotten furniture, will allow her to create an elegant timeless style that is in harmony with her era.
In 84 her works of the hotel Morgans in NY launched her international career, she then realized more and more projects of interior design: she designs numerous decors for hotels including The Lake in Japan, Im Wasserturm in Germany and the Sheraton at Roissy-Charles de Gaulle airport,, restaurants and chic stores as  the Azzedine Alaïa workshop, boutiques for Balenciaga, Bally and Lagerfeld which will  carry her signature, including a variety of furniture and everyday objects. In 1994, Andrée Putman realizes the interior design of the Concorde airplanes operated by Air France. Studio putman is now headed by her daughter Olivia
http://www.studioputman.com/

Matali Crasset ( born in 1965) is bringing democratic values to design “ bring fluidity to life” she uses to say. After studying marketing, she graduated as a designer, worked for Starck before creating her own label in 1988. She opened a place in common with the stylist Ron Orb and the music label Fcommunication. She loves to say: color is life, when I choose an orange or when I play with a blue, I just feel like using the color as we should all the time. That is to say without complex, limit or a-priori
http://www.matalicrasset.com/

Muji, the famous Japanese brands for design and minimalists objects, is going further and offers now houses to build as a kit design project mixing design and ergonomy:
Kit houses that are easy to assemble and that combine design and ecology. On the occasion of Tokyo Design Week, the models of these kit houses were exhibited in a park in central Tokyo. These green houses look like Japanese huts, "huts" that we can mount and install wherever we want. A real revolution in the world of construction. One of these very simple models, in line with Muji's spirit combining the functional elegance of the minimalist design, with the sober and clean aestheticism of Muji, was designed by the architect designer Naoto Fukasawa for whom a hut should allow to live independently where it was decided.
https://www.muji.com/jp/mujihut/en.html


As summarized by Anne Christine PIERRE "... What interests me in design concept is the search for a solution to a particular problem and the use of technical innovation that opens up new possibilities. It's a window on tomorrow. An improbability or an obviousness. As such it can be destabilizing. That is why a good design object must have "meaning" and cause a visual emotion in addition to its functionality. When all three are together we are dealing with a future classic! Philippe Stark excels in this practice »